Let’s have a look the up and coming Premier League talent that could win the PFA Young Player Of The Year in 2021. The 2020 ceremony winner was Trent Alexander-Arnold who is one of the leading favourites again this year.

HOW DOES PFA VOTING WORK?

All members of the Professional Footballers Association (PFA) vote for the PFA awards, including Player of the Year, Young Player of the Year and Team of the Year. There are some rules attached to the voting, such as players not being able to vote for any teammates. Trent Alexander-Arnold was the first defender to win it since Kyle Walker back in 2011/12.

Alexander-Arnold played a crucial part in Liverpool winning their first title in 30 years. He is seen as one of the best full-backs in the world and could well be in contention for the main award as well if he continues his impressive form. This season he hasn’t been as influential as last, however, there is a long way to and is a very good player.

Rashford is well respected by a lot of his professionals, especially after his off the pitch campaigning. 2019/2020 was his best goalscoring season for Man United and another successful season could mean he is another that is in contention for both awards. He has started the season well with two goals and two assists but is also playing well in the Champions League. Rashford is more than capable of taking this award from Alexander-Arnold!

Pullisic had a decent first season with Chelsea but will be looking to improve his consistency as Chelsea will want to be a lot closer to Liverpool and Man City at the end of the season. He could be another player that might have a chance of winning both awards. He hasn’t got off the mark in the league yet but has only played in three games.

The 18-year-old had his breakthrough season with Man United during 2019/2020 and would have been in contention for the 2020 award. He is one of the most promising youngsters in world football now and has established himself as a first-team player at Old Trafford. Greenwood is only 19 so will be challenging for this award for many years to come.

Foden had another decent with Man City during 2019/2020, scoring eight goals in 38 appearances in all competitions. He would have certainly been in contention for the 2020 award and will be again for 2021. The departure of David Silva from the Etihad means he will get far more playing time this season. So far this season, he has two goals from the opening six games. Pep has even been quoted as saying he is the best play he has ever coached in his life and Pep has worked with Messi.

Maddison is another one of the older players that have could be in contention for the award. He had consistently linked with a move away from his current club, Leicester City, but recently signed a new contract. During 2019/2020, he was a key player in their early season form which saw them sit in the Champions League places until the last week of the campaign. Maddison is technically brilliant and is Leicester’s set-piece taker.

Saka is seen as an essential part of the Arsenal squad by Mikel Arteta and will be in contention for this award in 2021. Another good season could see him as an outsider for the England squad for the re-arranged European Championships next Summer. He is very versatile and Arteta has already played him in a number of positions this season.

Mount appeared in all but one of Chelsea’s matches during the 2019/2020 season and is another player that would have been in contention for last season’s award. Last season also saw him make the first appearance for England and score his first goal at that level.

Tammy Abraham had a successful first full season as a regular for Chelsea, scoring 18 goals in all competitions. However, with Chelsea now spending big money on attacking players during the current transfer window, it remains to be seen if his future remains at Stamford Bridge. Wherever he plays next season, he will undoubtedly be a contender for this award, and the odds of 25/1 represents fantastic value. The Outsiders

BET ON THE YOUNG PFA PLAYER WITH BETFRED

Wilshere, now at West Ham, was once seen as the future for Arsenal and England. His breakthrough season came in 2010/2011 which saw him play 49 times across all competitions. One of his best performances came in the first leg of last 16 Champions League tie against Barcelona, then considered to be the best team in the world and ultimately went on to win the competition.

Walker would go onto Man City towards the later years of the decade and win his first significant honours as a professional, and it is easy to forget how much of a revelation he was for Spurs when he first came onto the scene. He played in 37 Premier League matches during the 2011/2012 season and helped his side to finish 4th.

Bale would eventually move to Real Madrid at the end of this season, where he would go onto to win the Champions League on four occasions. He scored 26 goals in 44 appearances as Tottenham narrowly missed out on the top 4 and Champions League football for the following season.

Jose Mourinho’s first season back at Stamford Bridge saw Hazard thrive and the Belgian was unlucky not to win the main PFA award that season. He would go onto the leading award the following season alongside helping Chelsea to regain the title. Hazard is now at Real Madrid, having moved to the Spanish giants for a fee around 90 million pounds.

This was the season when fans started to take notice of Harry Kane. He managed 31 goals in all competitions and was part of Pochettino’s side that would eventually become regulars in Champions League for the first time.

Ali won the award in 2 successive seasons after helping his side reach the Champions League and even challenge for the title until the later stages of both seasons.

Sané impressed during his time at City, so much so that Bayern Munich have added him to their already formidable attacking line up. He played an important in City’s 2018 title win, helping them become the team to get 100 points in a Premier League season.

Sterling was part of a City side that retained the title after a tense season fighting it out with Liverpool. The Winger scored 25 goals as his side also went onto win the League Cup and FA Cup.

Alexander-Arnold was part of the first-ever title-winning Liverpool side. He contributed with 13 assists and four goals over the season as well as being part of 12 clean sheets.

Kevin Beattie, then at Ipswich Town, was the first winner of the award in 1974. Looking through the full list of the past winners, the vast majority of the players went onto have incredible careers.

A young Ryan Giggs won the award twice at the start of his long and illustrious career at Man United, in 92 and 93. The 90s also saw Andy Cole, Robbie Fowler, David Beckham and Michael Owen win it. That was the start of sustained success for those players. Cristiano Ronaldo won it in 2007 alongside the main player of the year award.

Will Juventus Regain Their Serie A Title? 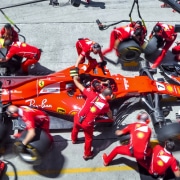 Manchester United Manager Odds – Ole In or Ole Out?