Fantasy football is a hugely popular game where fans pick an imaginary football team from a selection of real-world soccer players. Each week points are awarded to players based on their actual performances on the pitch.

The origins of the game can be traced back to 1971 when Bernie Donnelly organised an early version of Fantasy Football between his friends. In 1994 the British newspaper ‘The Telegraph’ launched a mass-market league which proved a big hit with football fans. Since then, FF has gone global with the help of the internet. Today you can take part in Fantasy Football with any number of providers. Until now, the prizes for winning a competition have remained relatively small or none existant. But that’s all changing now Paddy Power has decided to shake up the Fantasy Sports market.

HOW MUCH CAN YOU WIN?

Paddy Power has launched a Fantasy Sports competition which rewards players with big cash prizes. The leagues aren’t just football-related either, Golf, NFL, NBA and NHL fans can join in the action too. How much can you win playing Fantasy Football with Paddy Power? Well, some leagues have a total prize fund worth £500k (£100k to the winner). Smaller prizes range from £200 up to a few thousand quid.

Taking a closer look at the football/soccer competitions, you’ll see that you can wager in a variety of ways. The most popular game type is ‘Tournaments’ a high-paying contests with guaranteed prize pools. Play ‘Head to Head’ games; it’s you VS one other person, winner takes all the prize money. Those looking for a stronger statistical chance of winning can pick the ’50/50′ leagues, finish in the top half of the table to cash in.

Typically events on ‘Paddy Power Fantasy’ works like this: series of matches are listed, for example, Tottenham V Norwich, Leichester V West Ham and Man Utd V Burnley. From these fixtures, you can pick players from any team. Usually, you’re restricted to three players from one side in your team. You’ll have a fixed budget to spend on your team. Pick your players and pay the entry fee, now sit back and watch your super squad rack up the points. Goals scored by your players give the most points, but contributions like Clearances, Assists, Interceptions, Tackles and Shots on Goal all earn you points. 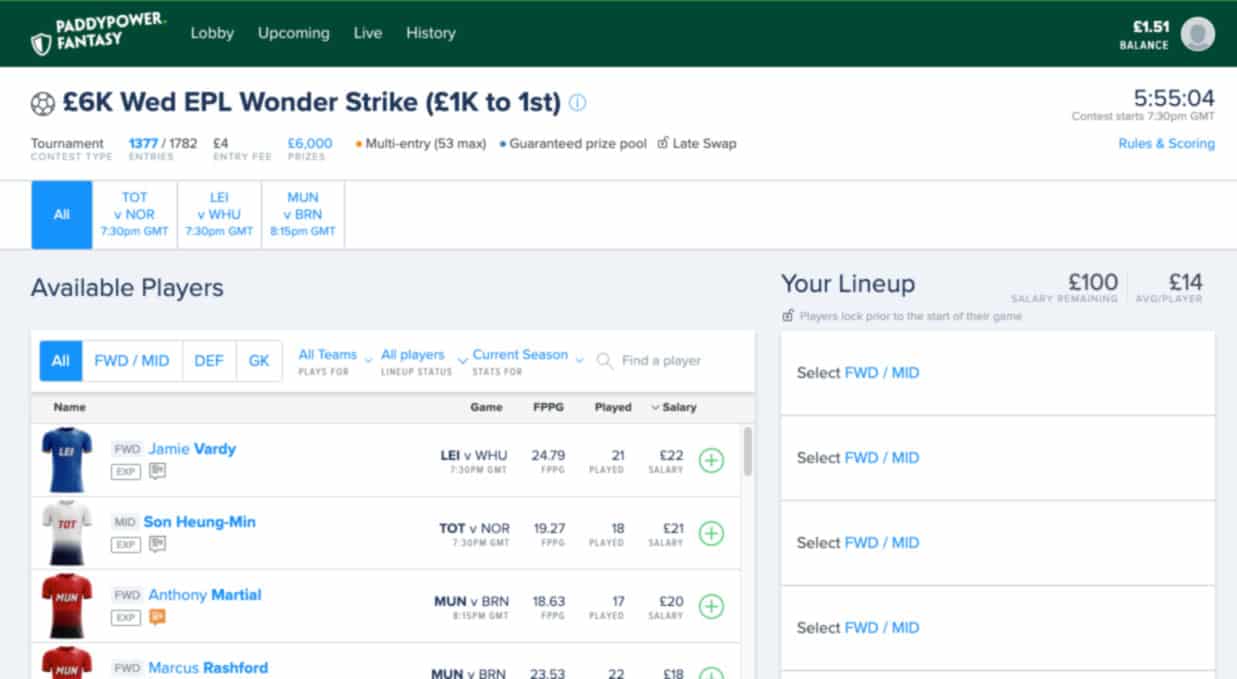 Paddy Power often group games/leagues over a shorter time frame from traditional Fantasy Football competitions. I prefer this as it means your money isn’t tied up for weeks on end. In the example above, games took place on the same evening. Rules for all the competitions can be found on the PP website, and each type of event is explained thoroughly, including the point-scoring process.

New and existing Paddy Power customers can play in Fantasy Leagues. Joining is easy, and you could receive a welcome bonus when you sign up online. Many competitions are free to enter or join the action from as little as £1 per entry. It’s worth noting ‘Beginner Leagues’ are available for new players, meaning you only play against people with the same experience level. If you’ve ever wondered where to play fantasy football for money? Sign up with Paddy Power and get picking those players today.