Bayern Munich were crowned winners of the 2019/2020 Champions League after beating PSG in the final. Their 6th triumph in the competition.

Will Bayern make it 7 in 2021 and become only the second team to retain the trophy in the Champions League era? Let us have a look at their chances and the teams that will be looking at stopping them.

Most of Europe’s big hitters have qualified for the 2020/21 Champions League. Man United have returned after a season in the Europa League, Leicester City just missed out following a poor at the end of the season.

The likes of Real Madrid, Barcelona, Juventus, and PSG are all entering as usual and will be hoping their campaign ends in glory.

All odds listed are with PaddyPower unless stated.

Liverpool – 6/1
Jurgen Klopp’s side will be looking for an improvement in the upcoming season after a disappointing last 16 exit in 2019/20. There is a question about whether they can compete on multiple fronts.

There are odds of 10/11 that they will finish the season without any major trophies.

Man City – 5/1
City were quick to strengthen their squad with the signings of Nathan Ake and Ferran Torres and will be hoping to go beyond the Quarter Finals, a feat that has eluded the club since Pep Guardiola took over in 2016.

Can they finally win the Champions League?

Man United – 22/1
United will need to strengthen the squad if they want to compete on their return to Europe’s main competition. Bruno Fernandes has been a revelation since he signed, but they will undoubtedly need others of his quality.

22/1 odds make United a relative outsider, but they’re only a few signings away from challenging and 22/1 is a great price.

Chelsea – 19/1
Performances against Bayern Munich during the last 16 shows that Chelsea have a lot to do in Europe, but the signings of Timo Werner and Hakim Ziyech are certainly steps in the right direction.

With their transfer ban now a thing of the past and seemingly plenty of money available, they will be looking to strengthen further and get to the later stages of the competition.

Having blown away Barcelona in the Quarter Final, Bayern put in professional performances against Lyon and PSG to claim the trophy. They have already added Leroy Sane to a formidable attacking line-up and will be confident of another successful season.

In the Champions League era, only Real Madrid have managed to retain the trophy. Man United came close in 2009, losing the final after winning it the season before.

The competition has been won by different teams in 2019 (Liverpool) and 2020 (Bayern Munich). On both occasions, these sides claimed their 6th triumph and stopped a club from winning their first (Tottenham and PSG). So what are the odds on a first-time winner in 2021?

PSG – 7/1
Having reached the final for the first time, PSG will be looking to go one better in 2021. Despite all the money spent over the last few years, they are still short of quality in defence and midfield.

The loss of Thiago Silva means they might also lack some experience next season.

Atletico Madrid – 30/1
Having reached two Champions League finals in 2014 and 2016 and losing them both to Real Madrid, Diego Simeone is still desperate to win the competition.

It remains to be seen if they have the talent and mentality to go all the way in the tournament.

Atalanta B.C. – 25/1
Following on from an outstanding debut season in the Champions League, Atalanta will be hoping to cause another surprise and go a step further in the competition.

Sevilla – 60/1
Following another great season in the Europa League, they will be hoping to make a mark in the Champions League finally.

Winning the competition would be a huge surprise, but they should make the later stages at least.

Other Clubs In The Running

Barcelona – 14/1
Barcelona’s humiliating Quarter Final 8-2 defeat against Bayern Munich was one of the worst losses in the club’s history, and they will want to recover quickly in the upcoming season.

There are doubts over the long-term future of several players, and they will need several new signings if they’re going to win the competition for the 6th time. Their new manager is Ronald Koeman, a man who played a big part in Barcelona winning the competition back in 1992.

Real Madrid – 15/2
Following some uncertainty, Real Madrid looked a lot more consistent last season, and their La Liga triumph would have pleased their fans and meant Zinedine Zidane has not been in danger of being sacked.

They will be looking to improve in Europe following a disappointing performance in their last-16 tie v Manchester City.

Juventus – 14/1
The dismissal of Maurizio Sarri was not much of a surprise, but the appointment of Andrea Pirlo certainly was. The midfielder played 164 times for Juventus towards the end of an illustrious career which also saw him play for Inter and A.C. Milan.

He will be hoping to improve their fortunes in Europe and lead them to their first Champions League since 1996.

Outsiders With A Chance?

Lyon and RB Leipzig both had great runs in last season’s competition, reaching the Semi-Finals. Similarly, during the 2018/2019, outsiders Tottenham and Ajax played out one of the classic Semi-Finals with Tottenham reaching the final.

That was considered as one of Lazio’s best sides and featured the likes of Allesandro Nesta, Juan Sebastián Verón and Roberto Mancini.

A Quarter-final spot this time would be considered a successful campaign. They have the prolific Ciro Immobile upfront. Immobile was the top goal scorer across Europe’s top five domestic leagues last season.

Ajax – 125/1
The Dutch side last won the competition in 1995, and many would consider it a miracle if they were to win it again, especially after their disappointing run in 2019/2020.

Unlike previous seasons, they will not have to navigate any potentially tricky Qualifying Rounds.

Porto – 125/1
It would take a lot for the 2004 winners to pick up a 3rd title. They did not even qualify for the Group Stages last season. However, like Ajax, they will enter straight into the Group Stages for the upcoming season.

Zenit Saint Petersburg – 300/1
The 2020 Russian Premier League champions have had some success in Europe, winning the Uefa Cup in 2008. They are unlikely to challenge for the trophy but reaching the later stages would be considered a success for Zenit.

Bruno Fernandes
Fernandes scored 8 goals in last season’s Europa League and will be excited for his first season in the Champions League with Man United.

With Fernandes now United’s leading penalty taker, he has every chance of him taking this goal scoring form into the new competition.

Jadon Sancho
Wherever he plays his football during the upcoming season, Sancho will be a player that no defender will want to play against. He managed 17 goals in the Bundesliga but will want to improve on the 2 he scored in the Champions League.

Cristiano Ronaldo
Ronaldo has scored an incredible 128 goals in the competition with 3 different clubs. He put in an outstanding performance in last season’s last 16 tie against Lyon but could not stop the Italian giants being knocked out on away goals.

Lionel Messi
Messi has scored 114 goals in the competition but looks unlikely to overtake Cristiano Ronaldo before he retires. As doubts remain over his long-term future, he will be hoping to win a 5th Champions League medal.

Robert Lewandowski
Lewandowski had an extraordinary campaign for Bayern Munich, scoring 55 in all competitions and helping Bayern to win the treble. Under normal circumstances, he would have been almost guaranteed to win the Ballon d’Or.

Alphonso Davies
Another Bayern player. Davies was outstanding in that extraordinary 8-2 victory against Barcelona and played a massive part throughout the season. He can play in multiple positions, which means he is sure to carry on being an integral part of this Bayern squad.

When Are The Champions League Draws?

Where Is The 2021 Champions League Final?

The final had been scheduled to take place at the Krestovsky Stadium in Saint Petersburg, Russia. However, due to the relocation of 2020 final, the Atatürk Olympic Stadium in Istanbul is now hosting 2021 final.

The Stadium was used for the 2005 final between A.C. Milan and Liverpool. At various points since its opening in 2002, it has been used as a temporary home ground by Besiktas, Galatasaray and İstanbul Başakşehir. 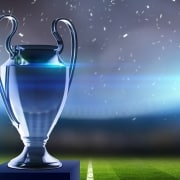