Does Anthony Joshua even know who he will fight next?!

The WBA, IBF and WBO champion booked out Wembley after he successfully defended his titles against Alexander Povetkin way back in September. However, AJ still hasn’t managed to find an opponent for April 13th. The Olympic gold medal winner is currently in a camp and with time running out he may have to turn his attention to another date and another opponent in Jarrell Miller.

Most boxing fans would like to see him face Deontay Wilder, who currently holds the WBC heavyweight belt, as between the two fighters they hold all the belts in the heavyweight division. Unfortunately, to many fans disappointment, it seems as though this won’t go ahead just yet. The Bronze Bombers attention seems to be directed towards Tyson Fury. Their recent fight ended in a controversial draw, with many believing that The Gypsy King did enough to win the fight. As a result of this then makes it difficult to arrange a fight between Joshua and Fury.

This then leaves Dillian Whyte, who AJ knocked out back in December 2015. Whyte has recently come out and said that Joshua never wanted to actually fight him and that if he did then negotiate would have happened sooner with realistic terms. Eddie Hearn, Joshua’s promoter, has said he doesn’t think a fight between the two could happen in April and that it’d be more likely to occur in May/June as Whyte would need more time to prepare. However, it does appear the fight will go ahead it’s just more a matter of when not if.

This then brings AJ to Jarrell Miller. The New Yorker is undefeated with an impressive 23 fight wins to his name. He’ll be hoping that he can make that 24 wins if a fight can be confirmed between him and AJ.

If Joshua were to fight Big Baby it would mean him making his debut in America. It is being reported that there is potential for this fight to happen in June of this year at Maddison Square Gardens making it a home fight for the American.

Miller has confirmed that terms for the fight have been agreed between the two heavyweights but that the fight is not a certainty. He is also to have said that if he were to beat AJ that he would take Joshua’s mum out on a date. The British boxer hasn’t responded to this but I’m sure he’ll show how he feels about such claims should the fight go ahead.

Paddy Power hasn’t really given Jarrell Miller too much of a chance with odds of 9/2 to win the fight should it happen. Joshua is being backed to add to his tally of 22 wins at 1/8. Despite being at 9/2 to win the fight it appears as though it won’t be an easy win for AJ. For him to win in round one is 16/1 and then 11/1 for round two and 10/1 for rounds three, four, five, six and seven. 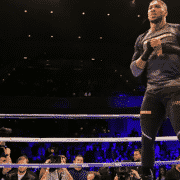